Innovations are driving the development and production of increasingly powerful and cost-effective solar cells and modules, as is evident in the trajectory from multi-busbar technology to half-cut cell modules to solar tiles and shingles.

Climate-Neutral Companies are on the Rise

The share of European companies that use renewable energy has increased dramatically in recent years.

Our vision: a renewable, decentralized, digital energy supply available around the clock.

Combined Heat and Power is the Backbone of the Energy Transition

Combined heat and power is the key technology for sector coupling

The AWARDs for Your Innovations

Enter your innovations for the AWARDs and stand out as an Energy Game Changer!

Agrivoltaics has the Wind at its Back

Agrivoltaics describes a method for the shared use of agricultural land for food production and PV power generation. Agrivoltaics boosts land use efficiency and allows for the production of more solar power while preserving arable land. Agrivoltaics technology has seen a lot of progress and global dissemination in recent years, with the global installed output of agrivoltaics rising from 5 MW in 2012 to around 2.9 gigawatts (GW) in 2020. 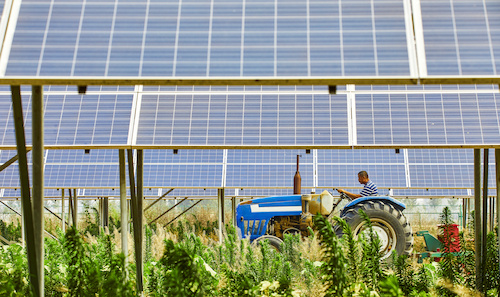 In view of climate change and increasing droughts and extreme weather events, agrivoltaics offers several advantages: zero-emission solar power plus food production plus the protection of crops from drought and damage caused by extreme weather such as hail or strong rain. The world’s largest agrivoltaics installation has been built on the edge of the Gobi desert in China, where berries are being cultivated underneath solar modules with an output of 700 MW.

One of the challenges to an even wider application of this innovative technology are investment costs. According to the Fraunhofer Institute for Solar Energy Systems ISE, the electricity production costs of using agrivoltaics are currently 9 euro cents per kilowatt hour on average, which is considerably higher than those of conventional free-standing installations.

Furthermore, farmers introducing agrivoltaics in European countries such as Germany are not eligible for EU agricultural subsidies for the land in question, so they are forced to obtain building permission through a complex process.
However, framework conditions in Germany are about to improve: The amendment to the Renewable Energy Sources Act (EEG) provides for innovation tenders in various fields, including agrivoltaics.

At around 1.7 terawatts, the technical potential of agrivoltaics is vast. Provided the regional climate is suitable, synergy effects make agrivoltaics particularly promising for special crops such as fruit and vegetables as well as for vineyards.

A 2.7-MW agrivoltaics installation in the Dutch province of Gelderland demonstrates how this idea can be put to large-scale use. Here, raspberry bushes are growing under a 2.5-meter-high, semi-transparent roof made of 10,250 solar modules across an area of 3.2 hectares. The modules let through enough sunlight for the plants to grow while protecting them from extreme weather, such as hail, heavy rain or direct sunlight. The farmer and operator used to use protective foil for this purpose, which needed to be replaced every six years.

Read more about the topic in our Trend Paper Agri-Photovoltaics

The World’s Leading Exhibition for the Solar Industry

E-Mobility: Photovoltaics in the Fast Lane

In many towns and cities, electric cars are becoming increasingly popular.

Get an overview of all events.

The Solar Promotion Group as an employer and current job postings.

You are using an outdated browser

The website cannot be viewed in this browser. Please open the website in an up-to-date browser such as Edge, Chrome, Firefox, or Safari.